Look at These 2 Big Warning Signs for the U.S. Economy.
Interestingly, this economic measure’s “retracement of the decline from February is a Fibonacci 61%”.

The 7.4% GDP growth in Q3 notwithstanding, the evidence shows that the U.S. economy remains fragile.

Let’s start off with this chart and commentary from the November Elliott Wave Financial Forecast, a monthly publication which provides analysis of major U.S. financial markets:

Another warning sign for the U.S. economy is provided by this chart — also from the November Elliott Wave Financial Forecast. Here’s the commentary: 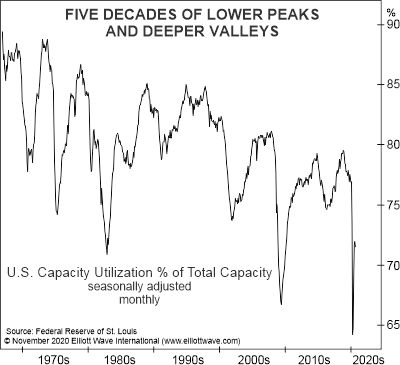 The chart shows the same retracement in U.S. Capacity Utilization, which tracks the extent to which working factory capacity is being used in the production of goods. It also reveals the presence of a steady, long-term decline. Capacity utilization has been registering lower highs and lows since the 1970s. As [Elliott Wave International] said in September with respect to a decades-long deterioration in consumer credit, the economy is up against much more than just “a short-term, pandemic-induced decline in demand.”

Indeed, U.S. consumers appear to be adopting a conservative mindset.

Here’s a Nov. 15 headline from the Financial Times:

At this juncture, this developing conservative psychology portends deflation.

As the 2020 edition of Robert Prechter’s Conquer the Crash says:

The psychological aspect of deflation and depression cannot be overstated. When the trend of social mood changes from optimism to pessimism, creditors, debtors, investors, producers and consumers all change their primary orientation from expansion to conservation.

Deflation is rare. There’s only been two major deflationary episodes in U.S. history. The first one stretched from 1835 to 1843. The second one — also known as the Great Depression — started in 1929 and its financial devastation extended into 1933. The next deflationary episode could be just as severe — perhaps even more so.

Get more insights into deflation — plus, learn how you can prepare.

Read the special free report: “What You Need to Know Now About Protecting Yourself Against Deflation.”