Oil at $130: Look Beyond Supply and Demand
“War” is the answer that only gets you so far

Most everyone knows that oil and gasoline prices have been soaring, and this steady climb started well before the Russia-Ukraine conflict.

The upward trend began in April 2020, when oil prices briefly went negative, and it’s continued ever since. These two headlines from recent months say the reason is supply / demand:

This “cause and effect” explanation is not a surprise. Most energy market observers believe supply and demand drives oil prices. Indeed, this belief is held at the highest levels of government.

President Biden addressed higher energy costs in his March 1 State of the Union address. This is from the Wall Street Journal (March 1):

Moreover, U.S. allies have agreed to release another 30 million barrels of oil from their reserves.

Yet, the price of crude oil and gas prices are higher as of this writing on March 7 versus what they were on the date of that presidential announcement.

Is it possible that something other than supply / demand is the main driver of oil prices?

Elliott Wave International’s read of history strongly suggests that this may in fact be the case.

Let’s take a look at supply / demand data from 1980 through 2015 via this chart and commentary from Robert Prechter’s landmark book, The Socionomic Theory of Finance: 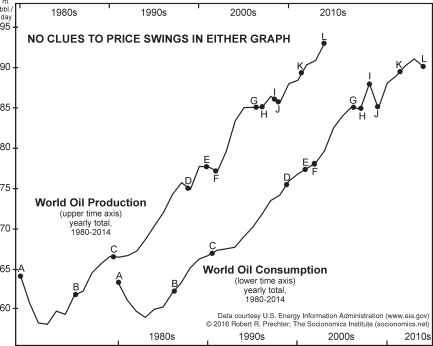 The chart depicts worldwide oil production (upper time axis) and consumption (lower time axis), respectively. The letters placed on these graphs indicate major turning points in the price of oil. See if you can guess which way, and how far, prices went each time by studying these graphs. I can’t do it. The list below gives you the price changes. 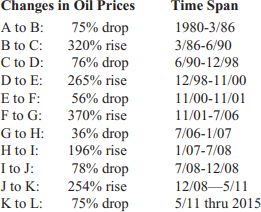 The Socionomic Theory of Finance goes on to say:

If supply and demand do regulate oil prices, one would think that shifts in supply and/or demand would have alerted economists to coming price changes. Did any of the 30,000 or so economists scattered over the earth use supply and demand analysis to forecast accurately the dramatic swings in oil prices over the past three decades? To my knowledge, none of them did.

Elliott Wave International’s view is that impulsive herding among speculators is what accounts for the dramatic swings in the price of oil over the past 40 years or so, not just supply / demand.

This herding is reflected in the oil market’s Elliott wave structure, and now is a crucial time to pay close attention.

If you’d like to delve into the details of how Elliott wave analysis can help you forecast financial markets, you are encouraged to read Frost & Prechter’s Wall Street classic book, Elliott Wave Principle: Key to Market Behavior.

Here’s a quote from this definitive text on the Elliott wave model:

Without Elliott, there appear to be an infinite number of possibilities for market action. What the Wave Principle provides is a means of first limiting the possibilities and then ordering the relative probabilities of possible future market paths. Elliott’s highly specific rules reduce the number of valid alternatives to a minimum.

You can learn about the “highly specific rules” of the Elliott wave model by reading the online version of Elliott Wave Principle: Key to Market Behavior for free!

This free access to the book is available to you once you join Club EWI, the world’s largest Elliott wave educational community. Club EWI is free to join and allows members complimentary access to a wealth of Elliott wave resources on investing and trading.

Just follow this link to get started right away: Elliott Wave Principle: Key to Market Behavior — free and unlimited access.