M&As: Beware of This Major Sign of a Stock Market Top
Here’s what often precedes “prolonged and devastating bear markets”

Inside the three publications that comprise Elliott Wave International’s flagship Financial Forecast Service, Elliott Wave International recently documented the many expressions of “financial optimism.” Things like crypto mania. Or meme stocks. Or just buying any stocks, all stocks, no matter if the companies that issued them are making money, losing it, or have yet to turn a profit.

And it’s more than just the individual investors who are caught up in it. Among the other behaviors this widespread financial optimism leads to are corporate mergers and acquisitions.

A corporate merger here or there may have little significance. However, when the biggest one in history occurs as part of a trend of a rising number of M&As — beware.

Consider a historical case-in-point: This is from the February 2000 Elliott Wave Financial Forecast, a monthly publication which provides analysis of major U.S. financial markets:

The euphoria surrounding AOL’s purchase of Time Warner may mark the top. As The Wall Street Journal put it, “The deal was heavy with superlatives and symbolism. It would be the biggest merger in history yahoo!”

That purchase had occurred about a month earlier [Jan. 10, 2000], which was within days of the Dow’s high.

As Robert Prechter’s At the Crest of the Tidal Wave noted:

Companies express optimism by taking over other companies. Such activity is indicative not of minor bull market tops, but of ones that precede prolonged and devastating bear markets.

That optimism was again evidenced for much of 2007. In January of that year, the Elliott Wave Financial Forecast again issued a cautionary note:

The other incredible expanding story is the “staggering” size and volume of corporate acquisitions. Newsweek and countless other articles find the rash of “bigger and bigger” deals “Phenomenally Positive” for the stock market.

Instead, later in 2007, the stock market hit another historic top.

The headline is referencing Microsoft’s purchase of Activision Blizzard.

Ironically, this is unfolding as technology stocks are being punished.

Could this purchase by Microsoft be a sign of another stock market top?

Of course, only time will tell.

One thing’s for sure: the Elliott wave model is sending a major message which every investor should know.

If you’d like to learn about the Wave Principle, the definitive text on the subject is Frost & Prechter’s Elliott Wave Principle: Key to Market Behavior.

Here’s a quote from this Wall Street classic:

Good news: You can read the entire online version of the book for free.

There are other signs that indicate a major stock market top in early 2022.

Below chart shows investors are fully committed to the stocks and they do not hold cash. A market top happens to be most unfortunate, but also the most likely moment to do this: 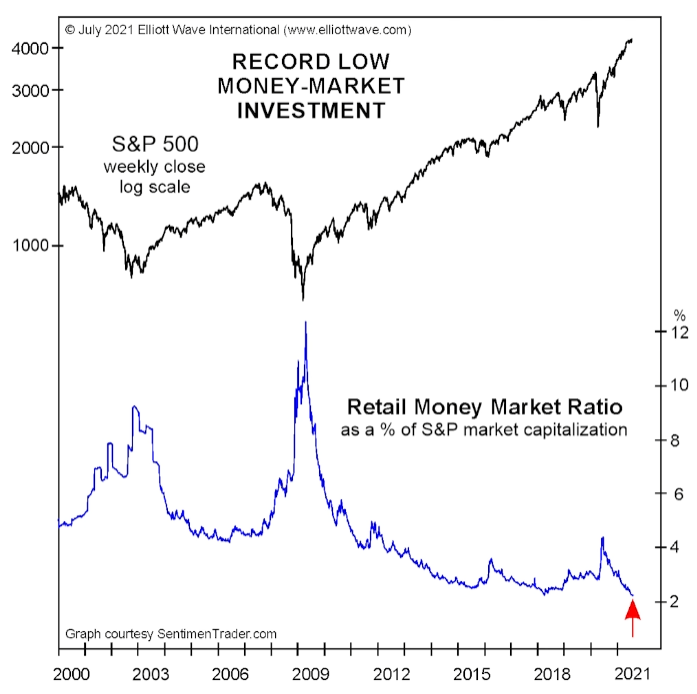 A Stock Market Top For the Ages

Robert Prechter gave a rare, live presentation — “A Stock Market Top for the Ages” — at the annual New Orleans Investment Conference in December 2021.

In just 20 minutes, Prechter shows 28 charts — everything from penny stocks to dollar volume in IPOs to SPACs — to give you a clear, bird’s-eye view of today’s markets.

“Unbelievable” is the word he uses to describe several of these charts.

This video sells for $99 in EWI’s Store. You get it FREE with this coupon code: STOCKTOP. You need to simply enter the code once you click on the link below and join free Club EWI to watch.

Free, watch “A Stock Market Top for the Ages” with code STOCKTOP now >>