Stocks got no-where in 2015. Gold topped back in 2011, oil bounce topped 2014. Various commodities resumed their decline during the last few years. Where is the stock market headed?

Risk On? Risk Off? Find Out Where Your Money Lies
A peek at the new free report from the editors of our Financial Forecast Service

It’s almost Christmas, “the hap-happiest season of all.” Yet, here’s a sobering fact for U.S. investors: S&P 500 stocks are actually lower now than at the end of last year (chart: Google Finance):

You could say that we’ve had a long bull market, so one “slow” year is OK. But Steve Hochberg and Pete Kendall, the editors of Elliott Wave International’s Financial Forecast Service, have recently documented several indicators which confirm that investors are actually losing their appetite for risk.

In fact, EWI has put together a subscriber-level special report with specific details on this phenomenon — from IPOs to corporate buyback to emerging markets.

You’ll find an excerpt below — and to read this new report in full, free, simply click here.

From Risk On to Risk Off

…Another example is the market for Initial Public Offerings, which The Elliott Wave Financial Forecast identified as ripe for a reversal back in the fall of 2014.

Citing a “euphoria” surrounding Alibaba, which remains the largest IPO ever, we noted a similarity to the record-setting deals that hit the market in November 1999 and March 2008. After each ebullient period, the overall market fell sharply. The long term chart of the Bloomberg IPO Index shows the reversal in the IPO aftermarket that followed each speculative episode: 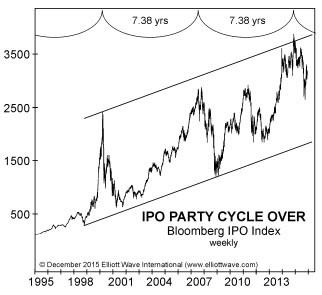 Interestingly, the peaks are exactly 7.38 years from each other, creating a long-term cycle top that is now behind us. Since September 2014, more than half of the 35 companies that went public with initial valuations of more than $1 billion are now below their IPO price. Many of the most heavily hyped offerings since 2011 are also down dramatically from their post-IPO highs, such as Alibaba (-30%), Twitter (-65%), Zynga (-85%) and Groupon (-90%).

Square Inc., a digital payment company, was supposed to be the next high-flyer when it debuted in mid-November, but before it even hit the market, its prospects diminished as underwriters reduced its offering price to $9 a share, 20% below its estimated opening range.

According to The Wall Street Journal, “skeptical investors” forced the reduction, “further souring the market for new technology-company stock.” …