In many global regions, economies are flourishing.

For example, here are two headlines about the U.S.:

The goings-on in the United Kingdom provide another example. Employers in the UK are hiring people at the highest rate in more than six years. Plus, business and consumer spending are climbing swiftly — at the fastest clip in a quarter of a century.

So, it wasn’t surprising to see this June 18 CNBC headline:

However, here’s what investors need to know: An economic boom follows an uptrend in the stock market, not the other way around. In other words, history shows that a booming economy may serve as a contrarian indicator. 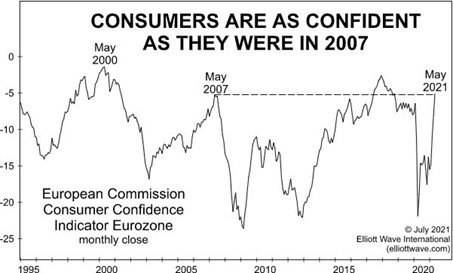 The chart shows that consumer confidence in the European Union two months ago eclipsed the survey’s pre-pandemic optimism from February 2020. Financial markets have traveled this territory before. In May 2020, GMP discussed two prior outbreaks of consumer overconfidence and noted that bear markets followed such sentiment. In the case of this survey, the all-time high came in May 2000.

Yes, consumer and business confidence might climb even higher. However, the point is: The “boom part of the cycle” appears to be in the “mature” zone. Another key takeaway is that many in the investment community see the economic upturn as a sign that the bull market in stocks will persist when history suggests just the opposite.

The best way to get a handle on the world’s stock markets is to use the Elliott wave model, which reflects the repetitive patterns of investor psychology.

After all, as Frost & Prechter’s Elliott Wave Principle: Key to Market Behavior notes, “The Wave Principle is governed by man’s social nature, and since he has such a nature, its expression generates forms. As the forms are repetitive, they have predictive value.”

Want to see (FREE) what the waves are predicting next for
50+ of the biggest global markets?

Stocks in the U.S., Asia and Europe; bitcoin + other cryptos, bonds, FX, gold, oil… now through August 6, join us at Elliott Wave International for a free investor event, “Around the World in 19 Days.”

It’s our main event of 2021 — this journey takes you around the world’s 50+ most active markets in 19 enlightening days.

August 21 Update:
Why a Global Fund-Manager Favorite May Start to Flounder
This chart shows a “dramatic divergence” between U.S. and European stocks.

Cryptocurrencies and so-called meme stocks have certainly received a lot of attention from investors.

Another investment category that has been in favor recently is European equities. No, they may not be quite as “hot” as, say, bitcoin — but they’ve been receiving more attention than usual.

Let’s start with some recent headlines:

According to a June survey by Bank of America, more than a third of global fund managers are overweight eurozone equities, their highest exposure to Europe since 2018.

So, is it time to jump on the European equities’ bandwagon?

Well, let’s return to the July Global Market Perspective for the big picture. Here’s a chart and commentary: 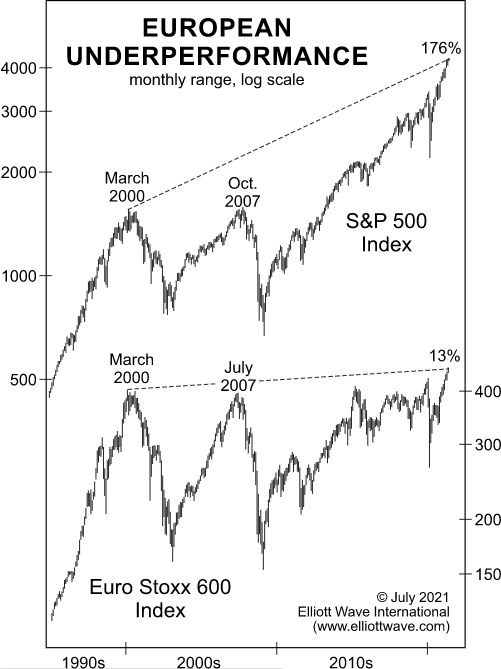 [It’s] true. The Euro Stoxx 50 has handily beaten the S&P 500 in dollar terms this year. However, take a look at this stunning chart showing the dramatic divergence between the two regions over the past two decades.

The price patterns of the main stock indexes of two of the region’s largest economies are also highly revealing.

Also see charts of three European meme stocks — and, get analysis of cryptocurrencies, forex, bonds, metals, energy and much more — all in all, coverage of 50+ worldwide financial markets.

Here’s another quote from the July Global Market Perspective:

In a broad benchmark of U.S. stocks known as the Russell 3000 Index, there are 726 companies whose earnings don’t cover their interest payments, a red flag to pros. These zombies are up an average of 30% in 2021 — trouncing the 13% return for the whole index — 41 have doubled since New Year’s eve.

Even explicitly dire warnings don’t seem to register. A bankruptcy plan under consideration by GTT Communications Inc. would wipe out shareholders, which is typical in Chapter 11 cases. Nevertheless, the company’s stock is up about 69% since then.

Defiance of warnings is a trait of retail investors.