What Can Movies Tell You About the Stock Market?

The following article is adapted from a special report on “Popular Culture and the Stock Market” published by Robert Prechter, founder and CEO of the technical analysis and research firm Elliott Wave International. Although originally published in 1985, “Popular Culture and the Stock Market” is so timeless and relevant that USA Today covered its insights in a Nov. 2009 article. For the rest of this revealing 50-page report, download it for free here.

This year’s Academy Awards gave us movies about war (The Hurt Locker), football (The Blind Side), country music (Crazy Heart) and going native (Avatar), but nowhere did we see a horror movie nominated. In fact, it looks like Sweeney Todd, The Demon Barber of Fleet Street was the most recent to be nominated in 2008, for art direction (which it won), costume design and best actor, although the last one to win major awards for Best Picture, Director, Actor and Actress was The Silence of the Lambs in 1991.

Whether horror films win Academy Awards or not, they tell an interesting story about mass psychology. Research here at Elliott Wave International shows that horror films proliferate during bear markets, whereas upbeat, sweet-natured Disney movies show up during bull markets. Since the Dow has been in a bear-market rally for a year, now is not the time for horror films to dominate the movie theaters. But their time will come again.

In the meantime, to catch up on why all kinds of pop culture — including fashion, art, movies and music — can help to explain the markets, take a few minutes to read a piece called Popular Culture and the Stock Market, which Bob Prechter wrote in 1985. Here’s an excerpt about horror movies as a sample.

From Popular Culture and the Stock Market by Bob Prechter

Both a study of the stock market and a study of trends in popular attitudes support the conclusion that the movement of aggregate stock prices is a direct recording of mood and mood change within the investment community, and by extension, within the society at large. It is clear that extremes in popular cultural trends coincide with extremes in stock prices, since they peak and trough coincidentally in their reflection of the popular mood. The stock market is the best place to study mood change because it is the only field of mass behavior where specific, detailed, and voluminous numerical data exists. It was only with such data that R.N. Elliott was able to discover the Wave Principle, which reveals that mass mood changes are natural, rhythmic and precise. The stock market is literally a drawing of how the scales of mass mood are tipping. A decline indicates an increasing ‘negative’ mood on balance, and an advance indicates an increasing ‘positive’ mood on balance.

Trends in music, movies, fashion, literature, television, popular philosophy, sports, dance, mores, sexual identity, family life, campus activities, politics and poetry all reflect the prevailing mood, sometimes in subtle ways. Noticeable changes in slower-moving mediums such as the movie industry more readily reveal changes in larger degrees of trend, such as the Cycle. More sensitive mediums such as television change quickly enough to reflect changes in the Primary trends of popular mood. Intermediate and Minor trends are likely paralleled by current song hits, which can rush up and down the sales charts as people change moods. Of course, all of these media of expression are influenced by mood changes of all degrees. The net impression communicated is a result of the mix and dominance of the forces in all these areas at any given moment.

It has long been observed, casually, that the trends of hemlines and stock prices appear to be in lock step. Skirt heights rose to mini-skirt brevity in the 1920’s and in the 1960’s, peaking with stock prices both times. Floor length fashions appeared in the 1930’s and 1970’s (the Maxi), bottoming with stock prices. It is not unreasonable to hypothesize that a rise in both hemlines and stock prices reflects a general increase in friskiness and daring among the population, and a decline in both, a decrease. Because skirt lengths have limits (the floor and the upper thigh, respectively), the reaching of a limit would imply that a maximum of positive or negative mood had been achieved.

Five classic horror films were all produced in less than three short years. ‘Frankenstein’ and ‘Dracula’ premiered in 1931, in the middle of the great bear market. ‘Dr. Jekyll and Mr. Hyde’ played in 1932, the bear market bottom year, and the only year that a horror film actor was ever granted an Oscar. ‘The Mummy’ and ‘King Kong’ hit the screen in 1933, on the double bottom. Ironically, Hollywood tried to introduce a new monster in 1935 during a bull market, but ‘Werewolf of London’ was a flop. When filmmakers tried again in 1941, in the depths of a bear market, ‘The Wolf Man’ was a smash hit. These are the classic horror films of all time, along with the new breed in the 1970’s, and they all sold big. The milder horror styles of bull market years and the extent of their popularity stand in stark contrast. Musicals, adventures, and comedies weave into the pattern as well.

Pop music has been virtually in lock-step with the Dow Jones Industrial Average as well. The remainder of this report will focus on details of this phenomenon in order to clarify the extent to which the relationship (and, by extension, the others discussed above) exists.

As a 78-rpm record collector put it in a recent Wall Street Journal article, music reflects ‘every fiber of life’ in the U.S. The timing of the careers of dominant youth-oriented (since the young are quickest to adopt new fashions) pop musicians has been perfectly in line with the peaks and troughs in the stock market. At turns in prices (and therefore, mood), the dominant popular singers and groups have faded quickly into obscurity, to be replaced by styles which reflected the newly emerging mood.

The 1920’s bull market gave us hyper-fast dance music and jazz. The 1930’s bear years brought folk-music laments (‘Buddy, Can You Spare a Dime?’), and mellow ballroom dance music. The 1932-1937 bull market brought lively ‘swing’ music. 1937 ushered in the Andrews Sisters, who enjoyed their greatest success during the corrective years of 1937-1942 (‘girl groups’ are a corrective wave phenomenon; more on that later). The 1940’s featured uptempo big band music which dominated until the market peaked in 1945-46. The ensuing late-1940’s stock market correction featured mellow love-ballad crooners, both male and female, whose style reflected the dampened public mood.

We can now add the recent uprisings in North Africa and the Middle East to the category of life imitating art — specifically, music lyrics. Those who lived through the 1980s might be forgiven for hearing an unbidden snatch of music run through their heads as they watched first Hosni Mubarak and now Moammar Gadhafi try to hold onto power — “Should I Stay or Should I Go” by The Clash. In Libya, where Gadhafi has used air strikes and ground forces against the rebels, The Clash’s other huge hit from 1981, “Rock the Casbah,” describes the current situation so well it’s almost eerie:

Punk rock played by bands like The Clash, X, The Ramones, and the Sex Pistols had that in-your-face, defy-authority attitude that crashed onto the scene in Great Britain and the United States in the ’70s and ’80s. It’s interesting that the lyrics can still ring true 30 years later, but even more trenchant is how the prevailing mood is reflected by the music of the times, as seen in this chart that Robert Prechter included in a talk he gave last year. 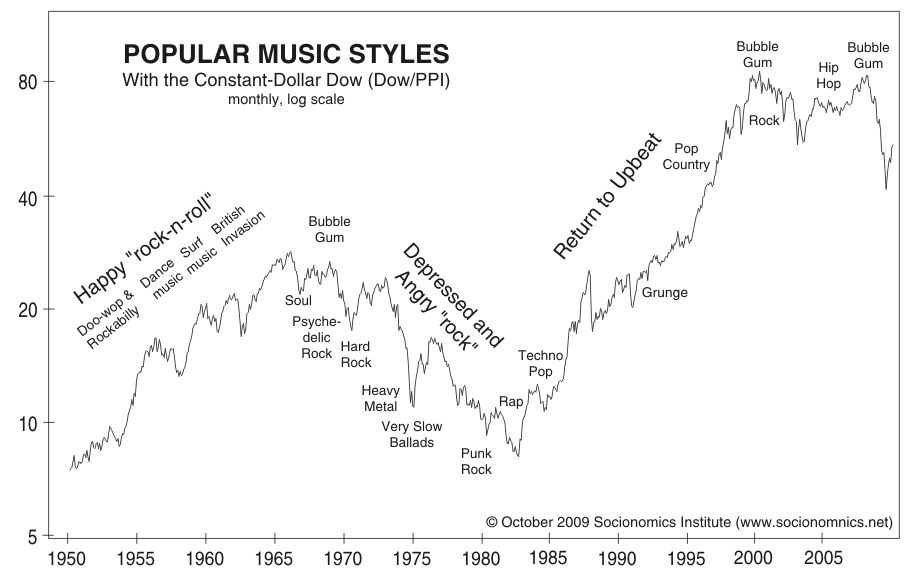 Popular culture reflects social mood, and the stock market reflects that same social mood. That’s why we get loud, angry music when people are unhappy with their situation; they want to sell stocks. We get light, poppy, bubblegum music when they feel happy and content; they want to buy stocks. In a USA Today article about music and social moods in November 2009, reporter Matt Frantz made clear the connection that Elliott Wave International has been writing about for years:

In the talk he gave to a gathering of futurists in Boston, Prechter explained how the music people listen to relates to social mood and the stock market:

Which brings us right back to punk rock. Although there’s lots of upbeat music in the air now, we can assume that after this current bear market rally, we will hear angrier music on the airwaves as the market turns down. It might be a good time, then, to pay attention to what the markets were doing the last time punk rock blasted the airwaves. Here’s an excerpt from “Popular Culture and the Stock Market,” which is the first chapter of Prechter’s Pioneering Studies in Socionomics.

Popular Culture and the Stock Market. Read more about musical relationships to social mood and the markets in this 40-page-plus free report from Elliott Wave International, called Popular Culture and the Stock Market. All you have to do to read it is sign up to become a member of Club EWI, no strings attached. Find out more about this free report here.