U.S. Stocks: Here’s Evidence of a “Nearly Unprecedented Acceptance of Risk”
Penny stocks fever has reached “the highest level since the first three months of 2000”

Penny stocks tend to be highly illiquid. In other words, it’s difficult to buy and sell them at favorable prices.

Even so, the lure of low-priced shares is hard for many market participants to resist, especially the novices — like in 2000, when penny stock trading had reached a fever pitch.

Well, just about the same thing has been going on this year. Here’s a Jan. 20 Reuters headline:

Analysis: A ‘buy’ is just a tap away: stock market dabblers drive trading boom into 2021

Our March Elliott Wave Financial Forecast offered its perspective with this chart and commentary: 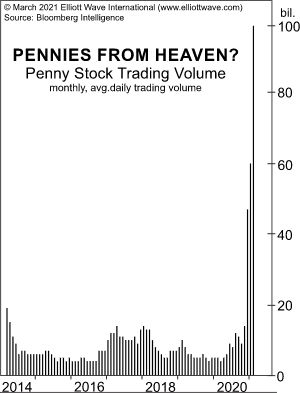 Total Penny Stock Dollar Volume hit $72 billion in January, the highest level since the first three months of 2000, when the dot-com mania peaked. Other than those three months, when penny-stock dollar volume averaged a whopping $155 billion, the value of shares traded in January 2021 was the highest. This suggests a nearly unprecedented acceptance of risk. … This chart shows the average daily trading volume in penny stocks.

“It is very markedly similar to what we saw in 1999 with these day traders and novice investors coming in and treating the market as a get-rich-quick type of scheme, and of course that didn’t end too well 20 years ago.”

Indeed, Elliott wave analysis is revealing a lot about what’s ahead for the stock market here in 2021.

[T]he Wave Principle often indicates in advance the relative magnitude of the next period of market progress or regress.

Every market participant — whether novice or professional — should know the Wave Principle’s current market message.

If you would like to dig deeper into the Wave Principle, you can read the online version of Elliott Wave Principle: Key to Market Behavior, 100% free.

Let’s wrap up with another quote from Elliott Wave Principle: Key to Market Behavior:

[R.N.] Elliott recognized that not news, but something else forms the patterns evident in the market. Generally speaking, the important analytical question is not the news per se, but the importance the market places or appears to place on the news.

Learn more about the Wave Principle and how you can apply this “law of nature” to your analysis of financial markets by following this link: Elliott Wave Principle: Key to Market Behavior — free and unlimited access.