Non-Fungible Tokens (NFTs): Another Financial “Fumble”
NFTs have taken “a round trip to nowhere”

However, glory on the football field has not translated to this field of finance (Business Insider, August 8):

Brady formed his own NFT company in 2021 and is one of many celebrities who became enamored with cryptos.

Yet, celebrity endorsements of cryptos have not exactly had a stellar record. Examples include a 95% plummet in the average price of NFTs sponsored by boxer Mike Tyson, a slide of more than 75% in World of Women NFTs backed by movie star Reese Witherspoon and a big tumble in the price of Bitcoin since movie star Matt Damon appeared in video advertisements in October 2021. And the list goes on.

The Global Market Perspective, a monthly Elliott Wave International publication which covers 50-plus worldwide financial markets, has been keeping subscribers apprised of cryptos. The July issue showed this chart and said: 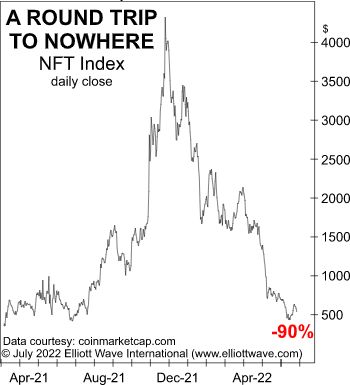 Non-fungible tokens (NFTs) are [an] asset class that demonstrates investors’ remarkable tolerance for losses in the wake of The Great Peak. The chart shows the NFT Index, which originated on March 20, 2021 to track the price of these tokens. The index is down 90% from its high.

Remarkably, the major slide in the price of NFTs and other cryptos has not dampened investors’ enthusiasm.

This is from the August Global Market Perspective:

Barron’s reported on August 4 that “mom and pop investors are pouring money into cryptocurrencies.” Retail investors are piling into bitcoin “at the fastest rate in history.”

Often, such zeal can serve as a contrarian indicator. On the other hand, manias can persist before they finally end.

This is an ideal time to consult the Elliott wave model. Keep in mind that no method of analysis offers a guarantee, however, the Wave Principle does reflect the repetitive patterns of investor psychology.

The Wave Principle is governed by man’s social nature, and since he has such a nature, its expression generates forms. As the forms are repetitive, they have predictive value.

Learn about these “forms” by reading the entire online version of this Wall Street classic for free!

The only requirement for free access is a Club EWI membership, which is also free.

Get on board now by following this link: Elliott Wave Principle: Key to Market Behavior — get instant access for free.