Food and Gas Prices: Is the Rising Trend (Finally) Ending?
The Elliott wave structure of a key commodity ETF provides a clue.

Consumers around the globe are wondering when they will finally see some relief from rising prices at the gas pump and grocery store.

It’s difficult for these consumers to get a handle on what to expect from reading recent headlines because some are conflicting.

On the other hand, a May 27 Washington Post column is titled:

Commodities Will Be the Next Market to Succumb

Of course, that headline references the drop in prices for stocks, bonds and other financial markets and says commodity prices are the next in line for a reversal.

Elliott Wave International suggests that you look to the Elliott wave model for insights into commodity prices. It has served our subscribers well.

Here’s what I mean: Back in October 2020, commodity prices had already completed their initial leg up and had slipped into a relatively shallow pullback.

Here’s what the October 2020 Global Market Perspective, a monthly Elliott Wave International publication which covers 50-plus worldwide financial markets, said as this chart was shown: 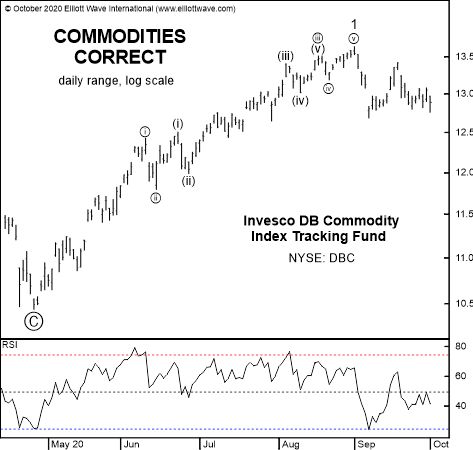 Students of Elliott wave analysis know that a “second-wave correction” means that the next wave will be the strongest part of the price advance, i.e., the third wave.

The Invesco DB Commodity Index tracking fund (NYSE: DBC) has probably begun [another wave] up, having ended its correction in December.

As you know, in the months that followed, food and fuel costs skyrocketed.

UN: Cost of food rises at fastest pace in over a decade

Americans are paying the most for gas in seven years

In 2022, the Global Market Perspective has continued to update subscribers on the Elliott wave structure of the Invesco DB Commodity Index Tracking Fund, as it has moved closer and closer to the pattern’s completion.

Keep in mind that the Elliott wave method does not guarantee an exact path for future prices of a given financial market, yet Elliott Wave International knows of no other method which surpasses its usefulness.

Without Elliott, there appear to be an infinite number of possibilities for market action. What the Wave Principle provides is a means of first limiting the possibilities and then ordering the relative probabilities of possible future market paths. Elliott’s highly specific rules reduce the number of valid alternatives to a minimum. Among those, the best interpretation, sometimes called the “preferred count,” is the one that satisfies the largest number of guidelines. Other interpretations are ordered accordingly.

If you’d like to read the entire online version of this Wall Street classic, you may do so for free once you join Club EWI, the world’s largest Elliott wave educational community.

A Club EWI membership is free and opens the door to free access to a wealth of Elliott wave resources on investing and trading.