You’d have needed to search far and wide to find someone calling for a rebound. Most investors feared that more of the same was ahead for stocks.

At the time, a closely watched sentiment index had also reached an all-time low at 2% bulls.

Even so: Just days before stocks bottomed, Bob Prechter said this to subscribers:

I recommend covering our short position at today’s close. … Probabilities for further decline immediately ahead have shifted. … The market is compressed, and when it finds a bottom and rallies, it will be sharp and scary for anyone who is short.

Indeed, the market did rally. Granted, the duration of the uptrend has lasted longer than anticipated. Yet that has led to extreme investor complacency. Look at this chart from the Jan. 23 Financial Forecast Short Term Update (labels removed):

As you probably know, the CBOE Volatility Index, or VIX, is a measure of investor fear (or the lack thereof). You can see on the chart how fearful investors were at the end of 2008 and leading up to the March 2009 low. That’s a stark contrast to the lack of fear you see above. Investors are as comfortable with stocks as they were around the Dow’s 2007 all-time high.

A recent headline, quoting the head of JPMorgan Chase, is indicative of the broadly optimistic sentiment.

Is this the time to tap into the current uptrend, or should you separate yourself from the crowd in anticipation of a turn? Well, the Jan. 23 Short Term Update referenced the strong emotions that attend the end of long market trends and then noted:

It’s difficult to lean against the crowd and doing so doesn’t automatically mean that you’ll be right. There are never guarantees. But the odds are in your favor.

Please know that EWI does not recommend defying the crowd for its own sake. To be sure, a contrarian can get trampled during the strongest parts of bull markets, or mauled during the worst part of bear markets.

A prudent investor looks at the best available evidence before deciding how, when and if to act.

Be assured, dear reader: Your risk-free review will likely be one of the most important investments you make at this juncture.

To that end, EWI offers you a no-obligation education in Elliott Wave analysis. See below for details.

How to Spot a Stock Market Top

Back in March 2007, Robert Prechter recommended to short stocks. Fast forward to March 2009, he recommended to cover the short for a 800 point gain on S&P 500 and he predicted a rally that would take S&P 500 to 1100. As the rally matured, he started to get bearish again. But in April, he explained how all technical indicators were lined up on the sell side. Exact opposite of March 2009. Here is how the bullish media ridiculed him:

Even non-sports fans have heard by now about the recent debacle known as Baseballgate.

With two outs in the ninth inning, a first-base umpire called “SAFE” when the runner was clearly “OUT.” But this was no ordinary missed call; it cost Detroit Tigers pitcher Armando Galarraga a perfect game.

And as the blogosphere flooded with memories of other historic slip-ups that cost “so and so” star “this and that” honor. Demands for the commissioner of baseball to reverse the bad call grew louder by the hour.

It was indeed a very bad call. But the biggest, baddest call of all was not made on a sports field. It was made in the field of finance — specifically on the stock market. To wit: The mainstream umpires of finance stood near first base, and in April made this emphatic call for the uptrend in stocks:

Call Your Own Shots — Remove Dangerous Mainstream Assumptions from Your Investment Process. Elliott Wave International’s FREE, 118-page Independent Investor eBook shows you exactly what moves markets and what doesn’t. You might be surprised to discover it’s not the Fed or “surprise” news events. Click here to learn more and download your free, 118-page ebook.

In case you missed the event, here’s an instant replay:

Yet from its April 26 peak, the DJIA turned down in a jaw-dropping 1000-plus point selloff. The market suffered its worst May since 1940.

The markets have no commissioner to reverse the bad call of the financial mainstream. But at least one team of analysts remained ahead of the most game-changing moves in the world’s leading stock market, including a forecast that called the rally “OUT” in April 2010. Consider the following insight from EWI President Robert Prechter:

“We can project a top…between April 15 and May 7, 2010. It is rare to have technical indicators all lined up on one side of the ledger. They were lined up this way — on the bullish side — in late February-early March of 2009. Today, they are just as aligned, but on the bearish side.”

April 26 marks the high for the DJIA, followed by the devastating drop on May 7 — exactly within the date range Prechter’s forecast called for.

Call Your Own Shots — Remove Dangerous Mainstream Assumptions from Your Investment Process. Elliott Wave International’s FREE, 118-page Independent Investor eBook shows you exactly what moves markets and what doesn’t. You might be surprised to discover it’s not the Fed or “surprise” news events. Click here to learn more and download your free, 118-page ebook.

A record of spotting major market turns most investors miss

Elliott Wave International is dedicated to helping subscribers anticipate the next major market turn. No, we don’t always “get it right” – yet the examples below speak for themselves.

Less than six weeks before the $147 high in the price of oil, the June 2008 Financial Forecast observed that “The case for an end in oil’s rise is growing even stronger.” The chart below was published in that issue: 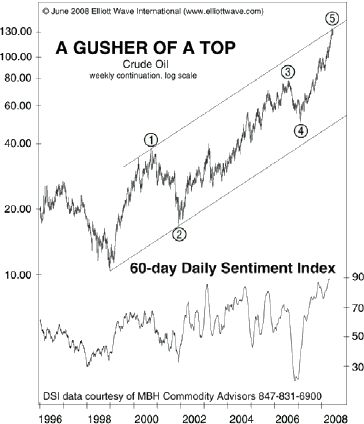 Note that the sentiment index on the chart shows bullish sentiment reaching 90%.

In each of these forecasts, the consensus opinion was on the opposite side. Most investors never saw these major trend changes coming. Again, we’re not perfect — no forecasting service is.

Come see what we see.

Become a member at Elliottwave International to get access to upto date financial forecasts: