Yes, Elliott Waves Work with Individual Stocks — Here’s How
“The primary value of the Wave Principle is that it provides a context for market analysis”

Elliott waves reflect the repetitive patterns of mass psychology — so they are ideally suited for analyzing the widely traded main stock indexes.

On the other hand, thinly traded individual stocks may not trace out Elliott wave price patterns nearly as well.

That said, there are many individual stocks which are widely traded — like most of the big and well-known companies (and others which have captured the interest of investors).

Consider the stock of the largest bank in the U.S. Back in March, our Global Market Perspective showed this chart and said: 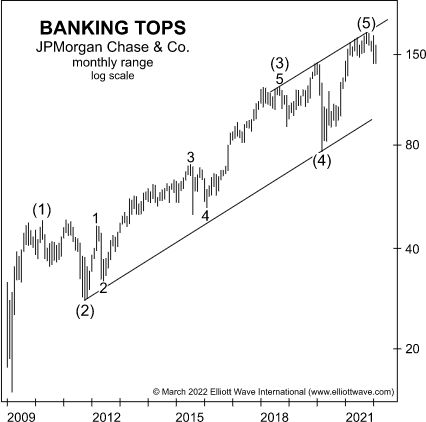 This chart shows the five-wave pattern of JPMorgan Chase’s rise from March 2009 to September 2021.

Of course, the completion of a five-wave up pattern means a downtrend is next. When that analysis published, the share price was $134.40. As of this intraday writing on Oct.3, it’s $106.79.

Let’s go back in time to review another example of how Elliott wave analysis can be applied to an individual stock.

This case-in-point involves GE. The September Elliott Wave Theorist was discussing wave analysis with individual stocks and showed these side-by-side charts and said: 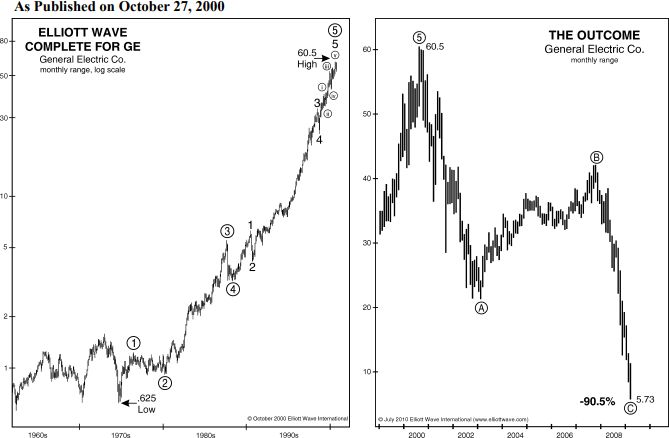 The October 27, 2000 [Global Market Perspective] published the chart on the left, showing a completed Elliott wave in GE stock. This quarter-century pattern portended a major reversal. The chart on the right shows what happened thereafter.

Not every forecast based on the Elliott wave model works out perfectly. At the same time, keep in mind these words from Frost & Prechter’s Wall Street classic, Elliott Wave Principle: Key to Market Behavior:

The primary value of the Wave Principle is that it provides a context for market analysis. This context provides both a basis for disciplined thinking and a perspective on the market’s general position and outlook. At times, its accuracy in identifying, and even anticipating changes in direction is almost unbelievable.

If you’d like to read the entire online version of the book for free, you may do so once you become a member of Club EWI, the world’s largest Elliott wave educational community (approximately 500,000 worldwide members).

A Club EWI membership also opens the door to free access to a wealth of other Elliott wave resources — such as videos and articles from Elliott Wave International’s analysts.

Jump on the Club EWI bandwagon now by following this link: Elliott Wave Principle: Key to Market Behavior — get free and instant access.