“Buying the dip” might work in a rip-roaring bull market, but it can cost you your shirt in a severe downturn.

Even so, this March 23 Wall Street Journal quote represents the mindset of many global investors:

I’m Scared. That’s a Reason to Buy.
The true contrarian only buys when it makes him feel physically sick to press the buy key.

This was a more dramatic version of the clarion call from a number of financial websites in late February to “hang in there.”

But, “hanging in there” and “buy the dip” are much more dangerous propositions in a ferocious bear market — especially for the “buy and hold” crowd.

Elliott Wave International’s April Global Market Perspective provides a history lesson with this chart of Germany’s main stock index during the bear market years from 2000 to 2003: 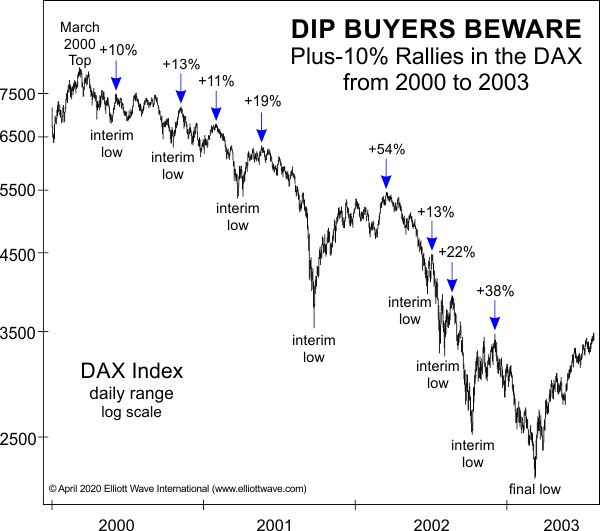 Over the course of a financially catastrophic 73% decline, the index experienced at least eight countertrend bounces of 10% or more. The largest rally — a 54% behemoth that followed the World Trade Center attacks in the United States in September 2001 — petered out by March 2002. Any dip buyers who got lured back in went on to suffer a disastrous 60% sell-off into the final bottom. And even the few investors who perfectly timed the September 2001 low lost 38% over the next 18 months.

Now, some market observers may say that investors who “hold” or “buy the dip” throughout a deep bear market will eventually come out ahead during the next bull phase.

Probably. Except, it may be years away. Japan’s NIKKEI, for example, famously topped in 1989 and has not revisited that high since. China’s Shanghai Composite topped in 2007 and has similarly stayed subdued. How many years will most investors wait before they “throw in the towel”?

Moreover, badly battered investors are afraid to commit to a new uptrend just when it’s the most advantageous time to do so. At this point, shaken investors believe up days in the market are “head-fakes.”

Indeed, the market has a way of fooling most investors at key market junctures.

By contrast, learning the rules and guidelines of Elliott wave analysis can help an investor anticipate significant trend turns in financial markets.

By knowing what Elliott rules will not allow, you can deduce that whatever remains is the proper perspective, no matter how improbable it may seem otherwise. By applying all the rules of extensions, alternation, overlapping, channeling, volume and the rest, you have a much more formidable arsenal than you might imagine at first glance. Unfortunately for many, the approach requires thought and work and rarely provides a mechanical signal. However, this kind of thinking, basically an elimination process, squeezes the best out of what Elliott has to offer and besides, it’s fun! We sincerely urge you to give it a try.

And, there’s no better time to give it a try than now.

Indeed, Elliott Wave International is now offering a 1-hour course (through May 15) on how to identify an Elliott wave pattern on a price chart. Plus, you’ll get insights on how to develop a trading plan to take advantage of your new-found knowledge.

The title of the course is The Wave Principle Applied and it’s free to Club EWI members. Joining Club EWI is also free. Join now to take advantage of this limited-time offer.