If there’s a single word to describe bitcoin’s price action, that word is “volatile.”

Yet, those who invested roughly a year ago in the cryptocurrency — and stuck with it — have been hugely rewarded. (At least until very recently, as bitcoin traded more than 50% lower from its all-time high on May 19, as the price careened nearly 30% at one point on that day alone.)

You’ll notice in the chart below that his analysis included a forecast for higher prices (as indicated by the upward blue arrow in the right side of the chart): 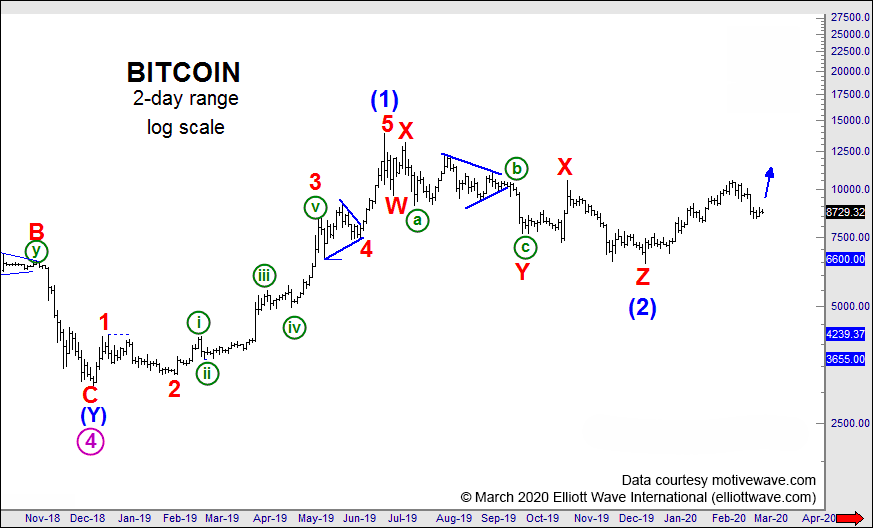 At the time, bitcoin was trading a tad north of $8700. Of course, since then, bitcoin has climbed as high as near $64,000 before pulling back significantly.

Remember, at the time the March 2020 Global Market Perspective published its bullish outlook, there was a lot of negative news about this “granddaddy” of crypto-assets.

For example, here’s a Feb. 27, 2020 headline from a major financial publication (Forbes):

Bitcoin Has Crashed — Now What?

Realize that EWI’s analysts do not extrapolate the present into the future as so many investors are inclined to do. No — they focus on a market’s Elliott wave pattern, and bitcoin’s price pattern at the time strongly suggested that the cryptocurrency was not only headed higher — but significantly so.

The questions now are: Does bitcoin have a lot further to climb — according to the Elliott wave model — or is an even higher degree of volatility expected just around the corner?

Well, a May 13 headline suggests that “fundamentals” are driving bitcoin’s price (CNBC, May 12):

Yet, it may be a good idea to see what Elliott wave analysis suggests is next for bitcoin, in addition to other cryptocurrencies.

If you’re new to Elliott wave analysis, or need to brush up on your knowledge, you are encouraged to read Frost & Prechter’s book, Elliott Wave Principle: Key to Market Behavior. Here’s a quote:

No matter what your convictions, it pays never to take your eyes off what is happening in the wave structure in real time. Ultimately, the market is the message, and a change in behavior can dictate a change in outlook. All one really needs to know at the time is whether to be long, short or out, a decision that can sometimes be made with a swift glance at a chart and other times only after painstaking work.

Good news: You can access the online version of this Wall Street classic for free when you join Club EWI, the world’s largest Elliott wave educational community (about 350,000 members and growing rapidly). A Club EWI membership is also free.